David Weekley Homes have been building in Mueller since the start of its development and are best known for their yard homes and row homes. They have built in every phase of the development and they are also very active in Section 7.

Here’s a quick run down of some of their row home offerings – attached housing that is also often referred to as a town home. These are all two story homes with a two car garage. While there are six different plans, these three plans are available at the time of writing. 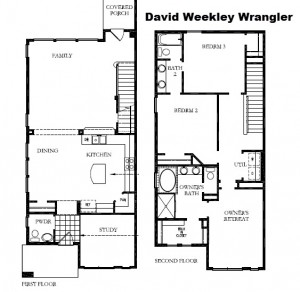 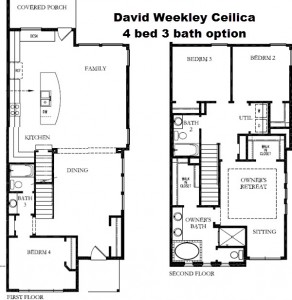 The other row home floor plans are the Welsh, Eastmont and Wyntree which we highlighted previously.

What I like about these homes is that they feel deceptively large inside – the high ceilings and long sight lines downstairs make for an open feel.

The main concern I hear from people who are not used to shared wall living is that they are worried about sound transmission between neighbors. David Weekley has long been using advanced framing techniques, which is jargon for wider wooden studs on the walls (2x6s rather than 2x4s.)

This has several advantages – one is that it allows for more thermal insulation allowing David Weekley to guarantee the maximum energy usage you would require to heat and cool the home. The other is better sound insulation too.

As more homes are built, prices rise. It’s one cunning way that builders offer an incentive to buy now rather than waiting. The next price rise for David Weekley is anticipated at the end of August or in September.

If  you’re interested in learning more about free representation on the purchase of a new home get in touch with Scott Brodrick at Sherlock Homes Austin to set something up – 512 215 4785. If you want to tour a Brookshire, there is one available to look around right now!