Is it too late to register to buy one of the new homes in the next phase of development? Not at all. Certainly some home styles are going to over subscribed, and if you want to get the pick of a limited number of homes, it pays not to delay in signing up. For homes that may not be ready to move in until the end of 2012, that sounds crazy, right?

Waiting lists at Mueller are nothing new – from the initial lottery phase, to each new announcement of home styles. The developer does a great job of announcing new homes at Mueller many months before they happen – when they sell the lots. 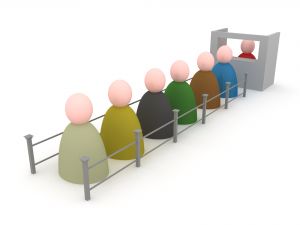 After the initial announcement, there’s sometimes a period of infrastructure development, then approval of home designs, and then the builders can start to write contracts on homes. In the interim, people flow into the model homes (currently there are two – one for David Weekley and one for Standard Pacific Homes) and register their interest in new homes.

It’s great for the builders. When they have homes to sell, they have a list of people to call, and the pressure to buy is large – if you don’t buy, there is always someone on the list behind you who will. Some people get put off by the numbers. For example, a potential client of mine registered yesterday for one of the new Standard Pacific Yard Homes in Section 6. His family is number 113 on the list – and there are 15 homes. Homes that probably won’t even sell until Summer 2012.

What are his chances of getting a home? Probably higher than you’d think – not everyone who registers is qualified to buy, or when the time of sale comes will be able to buy due to other commitments (the waiting list concept means the builder isn’t compelled to take contingent offers to purchase one of their new homes). For example I had several clients buy David Weekley Bergstrom Garden Homes despite being very low down on the lists for the first phase, and this model being one of the most popular.

Nevertheless it pays to get on a waiting list as early as possible – get in touch if you want to find out how.