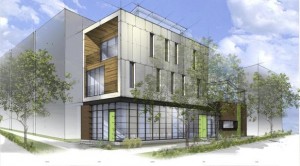 The next phase of development opposite the Wildflower Terrace includes several things – the Muskin / Michael Hsu townhomes, possibly some new affordable apartments by the people behind M-Station on MLK and the lot at the corner of Berkman and Antone will host the Pecan Street’s Demonstration Home which will be named after Pike Powers. Pecan Street Inc. (formerly the Pecan Street Project)  has closed on the lot and is in the final stages of planning for the build out of the three story home which it is anticipated will break ground in mid February.

The home will feature many of the latest energy efficient design and construction techniques that you would expect from the organization that is bringing Home Energy Management systems, 100 subsidized Chevrolet Volt electric cars and rooftop solar to the ‘hood as part of the Smart Grid Demonstration project. It also includes instrumentation and equipment to allow Pecan Street partners to test and demonstrate their new smart grid systems. There will be large floor to ceiling windows on the Berkman and Antone sides, so Muellerites will be able to see the lab in action. On the exterior will be some novel landscaping design that has not yet been seen in Austin. Click on the image for the Statesman article.