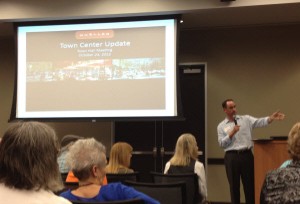 Over 200 people attended the recent Town Center Town Hall on Wednesday- over four years since the last one. The meeting was in two sections – the first an overview of the changes to the plan from the Greg Weaver (Catellus – master developer), Jim Adams (McCann Adams Studio – urban planner and architect) and Deanne Desjardin (Catellus – developer). The second was round table break out sessions which were concluded by Jim Walker (Mueller PIAC and much, much more) who wanted to bring back the golden threads of the discussions to the public forum. I’ll cover the first part here in this post.

I went as a resident and real estate agent, and left feeling inspired by the town center. I’m sure I’ll come up with a more sceptical perspective in another post, but I left with excitement, and a feeling that things would come to pass sooner rather than later. It’s certainly been a long time coming, as alluded to by Greg Weaver in his presentation, and there’s a long way to go. The presenters reinforced that they had heard the last town hall and understood that it was to be a “uniquely Austin” – an extended use (not just daytime), mixed use commercial district. Other features mentioned were hidden parking, shade (yay!) and for the zone to be “park once and walk”.

The living room of Mueller was one that I liked – while we certainly have some third spaces right now (not work and not living) – community meetings happen in parks, at the Wildflower Terrace, Seton, Frost Bank and The Ronald McDonald House – the Town Center as living room points to there being other places to meet and spend time.

Aldrich Street – given that areas such as SoCo, SoLa and the Second Street district are current destinations, the idea of naming the area after the principal street was shared by Deanne Desjardin. Aldrich Street right now is not much to look at – a thin wisp of road featuring a traffic circle between Airport and Simond Avenue. It will bend and extend and be the center of intense retail activities. A cinema and a hotel were mentioned, though there are of course, no guarantees. I drew a little map below to illustrate my understanding. 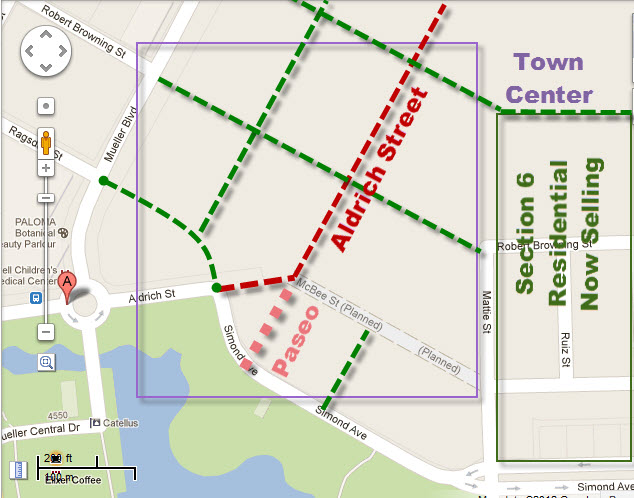 Aldrich Street is connected by the Paseo to Lake Park.

The Paseo – this is not in the sense of a formal march of bull fighters, but a leisurely public boulevard. It links the bustle of Aldrich Street with Lake Park – a broad, shaded, tree-lined pedestrian zone between the two. An elevated crosswalk will be added to Simond Avenue to make it obvious that cars are second class citizens in this area. The Paseo was variously described as the heart and center of gravity of the town center.

Silver Tsunami. One interesting point was made in the key note speech from our Seton host – there’s a silver tsunami on the way – with central Texas being a key growth region in the 55-64 year old age group, and an aging population. Though I don’t have any hard numbers, looking around the audience, the attendees seemed better represented by the over 50s than the under 40s. That said, I often get contacted by people wanting to retire to a walkable neighborhood in a sunny climate, and I think the Town Center will be a big draw for these folk as much as everyone else.

The phasing of the town center development was discussed – from 2006 – the present it has just been the periphery of what is available – the edge of town has been built up with Mosaic. Now underway is Mosaic 2, the AMLI complex, and the Austin Children’s Museum and Austin Playhouse. Also Section 6 of residential development (in which homes are currently selling) is under construction with the first of the Shop Houses. Construction of these elements is expected to complete in 2013 / 2014.

The following phase was given the date of 2014-2018 and was described as build out, and suggestions included the hotel and cinema as key anchor tenants which would bring people to the center (in addition to the Children’s Museum’s 200,000 annual visitors).

With a nod to the idea that the largest (or most vocal) demand was not for a Domain-style tribute to modern shopping, but a somewhat organic growth of a variety of tenants, it was mentioned that the buildings in the overall build out would be designed by different architects at different times on a somewhat organic schedule.

The street experience was described as comfortable – and while most of the buildings seemed to be constrained by a four or five story limit, the ground level facing the major streets will be kept as retail – so you would not be walking past the concrete wall of a movie theater.

Will there be local businesses? That’s a question that is often asked, and the developer outlined a Local Business Outreach process to try to bring in businesses that reflect the nature and character of Austin in their decor, merchandise and cuisine. Catellus is bound by the master development agreement to make best efforts to ensure local businesses make up 30% of the occupants in the town center.

I put my usual requests in for as much shade as possible and electric carts to transport people around to enhance the “park once” concept. The point is, I felt I got to have my say – and you can too. In fact, in the same way that voting is a good use of 5 minutes, there’s a handy survey to fill in to give your opinions – and a few weeks to do it.

Please take 5 minutes to fill in the Town Center Survey

Also, please comment below to let me know what you think would make a successful town center. Want to move closer? I’m at 512 215 4785.