I’ve said before that selling a house in Mueller is like shooting fish in a barrel. Now Texas Parks and Wildlife TPWD are bringing the home selling analogy to Mueller Lake. They are trying to encourage urban angling, and are stocking the lake with over 1,200 rainbow trout this weekend.

The event coincides with the weekly Mueller Farmers Market:

What : Catch a Rainbow Trout, and learn how to cook it.

What to bring : Your own fishing tackle. According to the Mueller POA, a fishing license is not needed.

Where to park : Since this is concurrent with the heavily attended Farmer’s Market and the opening hours of the ever popular Thinkery, parking might be tight, especially in the Town Center parking garage, pictured. Of course you could walk there cycle there or carpool, though I imagine some of you will find parking on the open space at the side of Mueller Boulevard. At some point, people are going to realize that the houses along Camacho and Zach Scott streets not only have the best views of the park, but some of the most convenient public parking. 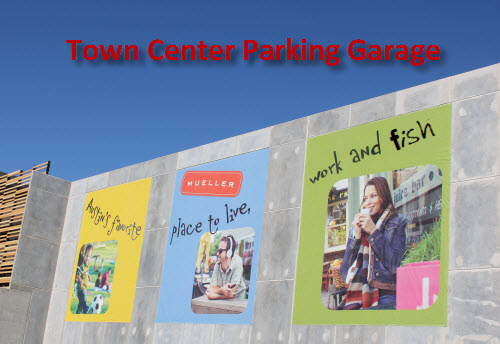 I’ve had some success fishing in Mueller (follow the link for a photo of my uncle with a 19.2 lb catfish), though I’ve never caught rainbow trout. According to TPWD’s handout, they are easy to catch.

Will the rainbow trout reproduce in Mueller? Probably not – they don’t tend to do so in Texas, and probably wouldn’t survive the summer as they are primarily a cold water fish. They are there to encourage anglers to fish.

I don’t plan on eating any fish that I’ve caught, but I do plan on catching some. Of all the recommended baits, I’ll eschew lures and cheese, and go for worms – I’ll be out there in my lucky fishing hat.

If you want to know more about homes for sale at Mueller, please get in touch. I know much more about them than I do about fishing, I promise : 512 215 4785