Is The Affordable Homes Program At Mueller Failing?

I love the affordable homes program at Mueller – I think it has some great ideas and makes some headway toward responsible development. The Mueller Foundation has among its advisers and directors the very capable Kelly Weiss and Jim Walker, which gives me some hope. Before I can talk about whether the program is failing, I’ll talk a little about what it sets out to do.

The larger goal that most people know about is that the program is tasked with making 25% of homes at Mueller available to those earning less than 80% of the Austin Median Family Income. As of November 2011, over 174 affordable homes had been sold. If you think that at about the same time around 700 homes total had been sold, the numbers are encouraging. A big tick in that box – affordable homes are being created at a steady pace, rather than building 4200 market rate homes and then building 1400 affordable homes at the end or the outskirts of the project. 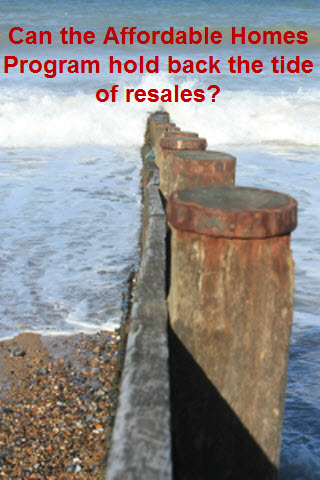 Another goal is sustaining affordability, which means taking measures to keep housing stock at the affordable price, when it comes to resale. The resale market has been fierce – if you look at the very few affordable homes that had come onto the public resale market until last month. The initial affordable resales all stayed in the program. Hooray! Let me explain a little about the resale process and home ownership. Participants in the scheme agree to share equity with the Mueller Foundation when they sell. They also agree to give the Foundation the first right of refusal to buy back the home. This essentially gives PeopleTrust, the people who administer the shared equity scheme, a short time to find another buyer who both wants the home and qualifies for the scheme, to maintain that home in the scheme. To sustain affordability.

So when would sustaining affordability break down? I can think of a number of situations that this might happen. I’m just going to use an example that oversimplifies things and I’ll just say right now, doesn’t reflect reality. So take these numbers with a pinch of salt.

That’s all well and good. All the Foundation has to do is find someone who wants to live in Mueller (not hard!), who qualifies for the scheme (quite hard) and who wants to buy Miss X’s house (that depends on how it presents). What happens if the number of people who are becoming eligible for the Affordable Homes Program is constant but the supply of Affordable Homes suddenly rockets? This could be for a few reasons. One might be that there are suddenly 40 new affordable homes being built. Another reason is that several participants in the program suddenly decide to sell their homes at the same time.

To some extent, when I see five ex-affordable row homes hit the MLS in the space of a few weeks, I think to myself, “That’s a first, what’s going on?”. This is something that we’re living with right now. If they’re hitting the MLS at market rate prices, that means they’re falling out of the affordable program. Which could simply mean that there are so many new homes competing for the same qualified affordable buyers that the affordable resale buyers aren’t interested. In most markets, competing with new builds makes any kind of resale a challenge – not so far in the under $700,000 range at Mueller in the last two years.

Or it could mean that the Foundation doesn’t have enough funding to sustain affordability in those homes. For Miss X’s home – the Foundation would have to come up with her portion of the equity – $33,000 in this example, if it wanted to sell the home at an affordable price of $160,000 again. It could increase the affordable price a little – subject to what the market and the lenders would bear, or it could sell to a family earning  up to 120% of the Austin Median Family Income – which would allow it to raise the price in line with the income. The latter might mean the Foundation wouldn’t have to come up with any funds to buy out Miss X’s equity share, but the former would probably only alleviate part of the buyout burden.

At any rate, I don’t personally think that the program is failing here at Mueller, just because five homes have fallen out of the program.  I think that there are perfectly plausible explanations as to why they have – all related to the current state of the market. I do think that sustaining affordability is a challenge, and that it would be sad if the percentage of affordable homes starts to shrink significantly. I see that the increase in allowable income for the resales was one step toward keeping homes in the program.

Here are some useful resources: