Is Mueller Austin An Attractive Place To Live?

Posted in Area Information, Austin, For Buyers, For Residents On February 10, 2015

Mueller is often touted as an example of a master planned walkable urban community – part of the New Urbanism as discussed on NPR’s All Things Considered for example. As a long time resident of Mueller I clearly think the neighborhood is something I want to live in, so I thought I’d use the criteria in “How to Make An Attractive City” to attempt to judge it.

The video suggest that there are six factors that are important when building a desirable city, and while Mueller isn’t a city by itself, it’s a green field site on which a town is rising. For the purposes of this post, I’d say that’s close enough. Here are each of the six factors and how Mueller stacks up.

Order and symmetry – does the neighborhood have the appearance of someone in charge?

As a master planned community designed over a decade, I would argue it does. The original design documents dictate everything from housing styles to the roof styles upon them. Each section of new construction has yielded something new – there is sufficient variety across the whole so that the neighborhood doesn’t seem too rigid, though you could argue that going down one of the major streets you will see rows of similar houses.
I think that there is a balance between uniformity – houses within a pre-determined color palette and similar widths and heights – and diversity – homes of different types in clusters, retail, office, commercial and all importantly, public spaces.

Visible Life on the Streets – are their people out doing things?

For me the inclusion of porches and large sidewalks makes it easier to walk along and happen upon a neighbor in the midst of doing something. The parks are often peopled by those going about their business – from petanque in Paggi Square to the upcoming community gardens in Section 7.

A stroll along one of the busier boulevards will almost always result in a selection of dog walkers, runners, stroller pushers and perhaps with the coming of age of the Town Center – shoppers and amblers. The retail sections are largely accessed by vehicles in my opinion right now, but it’s not hard to imagine that as housing moves closer to HEB, there will be more foot traffic. 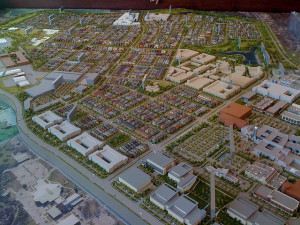 The neighborhood is denser than many in Austin, with projections of total population up from the original 10,000 to around 13,000 now. Whereas living alone was once a luxury, leaving the underclasses to live close together, I think Mueller has a closeness of neighbors unlike anywhere else I’ve lived in Austin. If the private realm of the home becomes too stifling, it isn’t hard to get out and see someone else.

There are a few squares where this is especially notable – the garden courts, the shared space in front of the garden homes, the neighborhood pocket parks and hopefully soon the plaza type commercial real estate in the Town Center. If you take a look at some of the large multifamily buildings – the apartments of Mosaic, Elements, AMLI and the Wildflower Terrace – they have the highest density with common shared space – the third space which is neither home nor work. The Greenway Lofts perhaps lack a shared space, but do face a great park.

Mueller isn’t particularly hard to get around – there are several large thoroughfares which segment the land. This criteria is perhaps more relevant in an area larger than 711 acres.

Is there much mystery in the neighborhood where cars don’t rule? I would say that there are a few spots, and the usage of the alleys is a big part of this. I had originally thought of the alleys as a way of relegating cars and garage doors to a private space not seen from the street, though I came to see them evolve into bustling destinations in their own right – used from parties to congregation areas for families. Mystery is a bit of a stretch perhaps beyond alley ways.

Scale – what are the most obvious sights on the horizon?

The video quotes Joseph Campbell – “If you want to see what a society really believes in, look at what the biggest buildings on the horizon are dedicated to.” and then goes onto suggest that five story buildings might be a sensible upper limit which would allow access to the sky for eyes on the ground. Mueller does well in that none of the buildings is allowed to be particularly high by the original design book.

When I think of the biggest, most notable buildings, the ones that come to mind are The Thinkery (children’s museum), the big box retail, the HEB, the Seton hospital, The Performing Arts Center. So it’s a little bit of a mix between education, commerce, health and retail.

Make it Local – does the neighborhood reflect Austin Texas?

If an alien landed in Mueller and tried to infer humanity from the way visitors and residents conduct their lives, they might conclude that humans like to build new homes, have outdoor parties, run in circle and have large scale public events. If being a long term Austinite means anything else, I think it additionally involves complaining about traffic and growth, and that is perhaps where Mueller is at odds with its host. Traffic really isn’t so bad within the neighborhood if you avoid Simond Avenue as it passes the Thinkery, and it’s not too far to get downtown or out of town. Growth has been a constant in the neighborhood and passing trucks full of concrete is part of the experience thus far, and of course we’re adding people to the city’s population and roads.
I’m not sure that the use of local materials is prevalent in the home building – I do see partial limestone exteriors on some homes, and if limestone makes cement then you could argue that Hardiplank and cement are Austin’s new native building materials, though I don’t think that type of reasoning would convince many.

So is Mueller Attractive?

I think the developer and builders promote a lifestyle that suits some people – a healthy, walkable, community-oriented life awaits.
Some are going to walk in and see only a cookie cutter neighborhood of cramped houses with no yards and say it reminds them of a condo community and where are all the mature trees?
If they were to stay awhile and visit, they might see that there are places to do exactly that – to stay awhile and visit. Life at Mueller can be more public if you choose it to be, and personally I like the bulk of the architecture and the signs of life.
If you want to find out more about living here, give us a call on +1 (512) 829-1351or get in touch with one of our expert real estate agents. We’d be happy to show you around or if you just can’t wait, check out one of our video tours of Mueller.
alley, density, lifestyle, new urbanism