How to Find the Ratings of an Austin School

How good are the schools in Austin? That’s a question I get asked as a real estate agent all the time, and one that I am ethically bound to refer to objective data (unless you’re asking my opinion as a parent and I’m off the clock)

There are many different ways to measure a school, and the Texas Education Agency (TEA) has a rating scheme in which schools fall into different categories: Exemplary, Recognized, Academically Acceptable and Academically Unacceptable. Remember, this is just one way to measure performance at a school, and I always advise meeting with parents of children at any given school to get a different perspective.

There are also many third party sites which offer data around schools – mainly to sell advertising to real estate agents, or to offer subscription based access to data. The reason that Realtors want to advertise around schools is pretty obvious – people relocating to Austin who are basing their search on schools will find an area that tracks to an exemplary school and start their home search based on that. You can search Austin homes by school at one of my sites too.

If you want to use the TEA website, it’s a little 1990s in appearance, and is about as usable as a chocolate teapot. If you’re patient, you can extract the data you need like this.

I like to look at the multi-year district view, which lets me see trends for a given school in AISD: 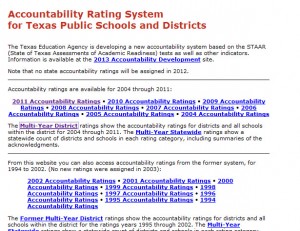 Then it’s a matter of searching for the Austin district: 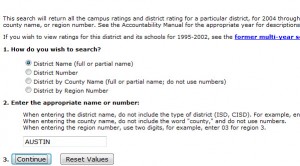 and then confirming the Austin ISD in Travis County.

If you would like more information about Austin homes near a particular school or schools at Mueller, please get in touch! 512 215 4785