A while back, I started to send out letters to folks at Mueller based on the floor plan of their homes. I felt a little bad about stalking a home for a client. My letters were thus apologetic – I had to use tax record data to find plans that matched our needs and then contact the owners directly, and I figured that may make people feel uncomfortable. But it paid off – I managed to help someone find a place here in Mueller in a competitive market.

I did it again a few months ago for another friend – sending two messages to two very specific homes, and helping her buy one.

When I had a list of buyers competing for another listing, I called another neighbor who had experienced issues selling his home and given up and found a home for one of these buyers. The sellers had the opportunity to sell with a minimum of showings and fuss, and everybody was happy. Aside from perhaps the people who seemed to think that I wanted to get them out of the neighborhood by sending them letters all the time.

So, what’s the moral of these three seemingly dull and self-congratulatory stories? I’m a great home matchmaker and go the extra mile and use a cattle prod to chase people from the neighborhood? Stalking works?

Not really. Well stalking does work. But that’s not the message. I got two emails last night from past clients in the space of 5 minutes saying they had received these handwritten cards: 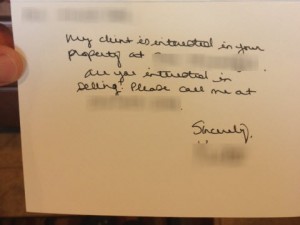 The notes in question

The neighbors in question realized that their homes were in demand. It’s true – most people don’t really track the market so much when they’re not looking to buy or sell. These seemingly innocent cards are quite a good idea on the part of the agent who sent them. Maybe they have a client interested, maybe they don’t. One job of the agent is to find people who are interested in selling homes and this certainly piques people’s interest. So hats off to them for sending the cards. And also at the time when some people are feeling the pinch due to rising property tax bills.

The moral of the story is that it really is a desperately low inventory scene around here, a nose-bleed sellers’ market, and if anyone is thinking of selling, they can do so with as much or as little fuss as possible – either publicly with the avalanche of MLS hunting buyers all queuing up outside their home desperate to take a look, or privately with a handful of showings. Either way, selling homes in Mueller is like shooting fish in a barrel right now. It’s always nice to be able to tell people that their homes are worth 10% more than they were last year, or whatever the number is right now.

Get in touch if you need any thoughts or help in finding out what your home is worth. Or perhaps more importantly how to buy smart if you do sell in a sellers’ market. 512 215 4785